So we all know that New Zealand is unstable. Literally. As anyone from Christchurch will assert. So it shouldn’t really come as a surprise that with all this up-ing and down-ing and to-ing and fro-ing of the land, that a river has changed direction. No, I don’t mean there is a river that runs uphill, but rather that the land under a river has shifted enough to make it turn around. That’s pretty crazy stuff. Like, at some stage in our geological history, the Nevis River has just stopped and then carried on in the other direction. Cooler still is that it is part of this river system: (Although the pillars of the Kings weren’t there the last time I checked).

So how do we know this?

It’s thanks in part to these guys who I wrote about in my last blog: 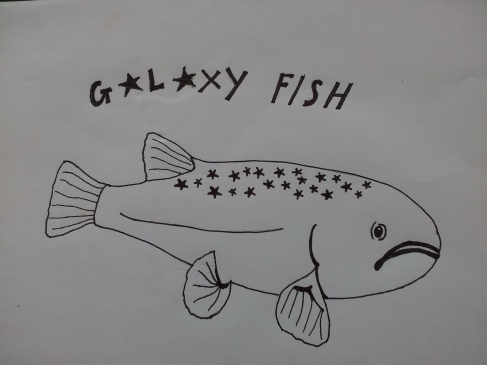 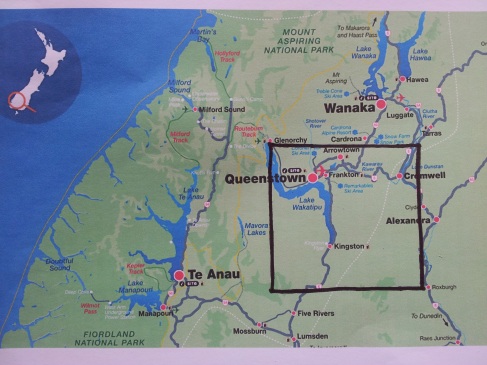 And the story involves this fish: 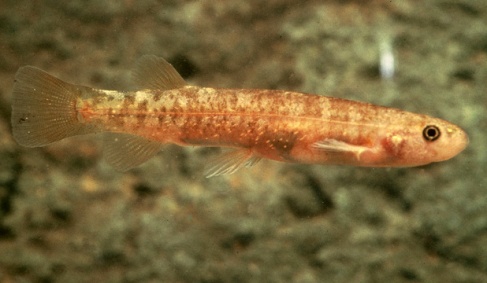 If there were an award for the best naming of a species, this would certainly be a contender: Galaxias gollumoides , aka the Gollum fish. There is even another very closely related species called the Smeagol fish.

Zoologists at the University of Otago have found that the Gollum fish in the Nevis have relatives in the Mataura River (to the south) but not in the Kawarau River, which the Nevis currently flows into. This supports the geologists’ evidence that in the Pleistocene (2 million-ish years ago) the Nevis used to run south through a valley between the Garvie Range and the Remarkables Range (the jagged mountains behind Queenstown).

As the mountains on either side grew, they pinched off the valley the Nevis was in. At the same time, erosion blocked off the Nevis, and caused it to run back the other way.  This isolated the Gollum fish in the Nevis from the Mataura river where it used to run. The Nevis population has since diverged from the Mataura population, but is still closely related.

P.S. If you want a closer look at the Nevis River, then this is a good way to do it!

Lake Wakatipu is one of the South Island’s stunning southern lakes, lying on the border between Otago and Southland. The lake has been the backdrop for Hollywood movies, including the Lord of the Rings trilogy – scenery which attracts not only movie directors, but also millions of tourists each year. But with the beautiful scenery comes a mystery which has bewildered residents, tourists and scientists alike – its level rises and falls by about 20cm every 27 minutes or so. It is nowhere near big enough to be tidal (and the rise and fall is too quick to be tidal anyway), and the inlets and outlets have been measured, and don’t explain this phenomenon. Since this “breathing” was pointed out to me as a kid, it has intrigued me how this could happen, so I decided to finally set the record straight and find out.

Queenstown and Lake Wakatipu, with the Remarkables mountains in the background. (Image from here)

This is the traditional (illustrated by me) Maori explanation:

Long ago, there was a Maori chief who had a beautiful daughter named Manata. There were many men who wanted to marry her, but she had her eye on one man in particular – Matakauri. Unfortunately Manata’s father thought Matakauri was unworthy to marry his beautiful daughter. One day, a giant, came into their village and stole Manata. Her father was absolutely distraught and said any man who brought her back could marry her.

This was Matakauri’s chance. He went into the mountains, where he observed that whenever the warm nor’wester winds blew, the giant would fall asleep. He waited for the wind to come, and then snuck into the giant’s cave to steal Manata back. She was tied up with strong cords, and Matakauri couldn’t free her, so he started to cry. His tears fell on the cord and the love in the tears dissolved them.

The pair fled together, and the chief allowed them to marry, as promised. 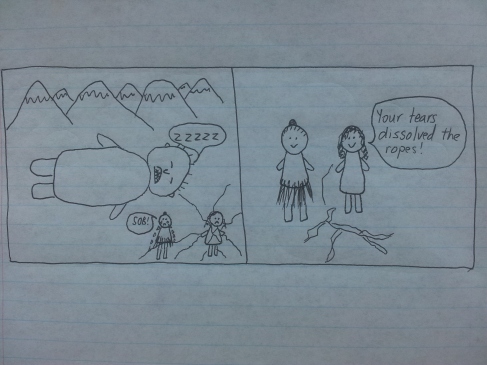 But the giant was still up in the mountains, which made Matakauri uneasy, so he decided to deal with him once and for all. So he went up into the mountains and waited for the nor’west wind to blow, then he set the giant’s bed of bracken alight. The giant went up in flames, and the fat in his body made a fire so intense it burnt a 400m deep hole in the ground. The flames melted the snow on the surrounding mountains, and filled the hole with water.

This explains why lake Wakatipu is in the shape of a sleeping giant. The head is at Glenorchy, the knee at Queenstown, and the feet at Kingston.

A giant’s heart cannot be destroyed, so it still beats to this day. This is why the water level in lake Wakatipu rises and falls about 20cms every few minutes.

Here is the scientists’ version of events:

A huge glacier once filled the valley in which Lake Wakatipu lies about 15 000 years ago. Although a glacier is frozen, it still moves. The ice on the bottom of the glacier grinds the rock beneath it, which makes a hole that gets deeper and deeper. Over time, Wakatipu the glacier retreated and then disappeared, but the hole was left behind. The hole filled with water and became Lake Wakatipu.

As for the breathing, scientists think it is because of a phenomenon called a seiche or a standing wave. Basically a wave passes by every 27 minutes which raises the water level by 20cm.

To visualise a seiche, imagine you are sitting in a fairly full bath and rock back and forth. You’ll find that there is a particular period to your rocking which will cause waves to grow until they overflow the bath (about once a second).

Scientists think that a similar thing is happening in Lake Wakatipu, but it is triggered by wind and atmospheric changes, rather than a person rocking in the bath.

But the great thing about science is nothing can ever be proven for absolute certain – maybe one day they will discover the heart of a giant beating at the bottom of the lake.