Ahh paua. Used to make shimmering blue-green eyes in the most beautiful Maori carvings.  A classic Kiwi icon in art, jewellery, and is of course used to make the tackiest souvenirs.

Fred and Myrtle’s Paua house at Bluff was always a must-see attraction until the shells were taken away.  They’re now in the Christchurch museum which doesn’t have quite the same charm as the real house, but it’s still kitsch Kiwiana at it’s best! 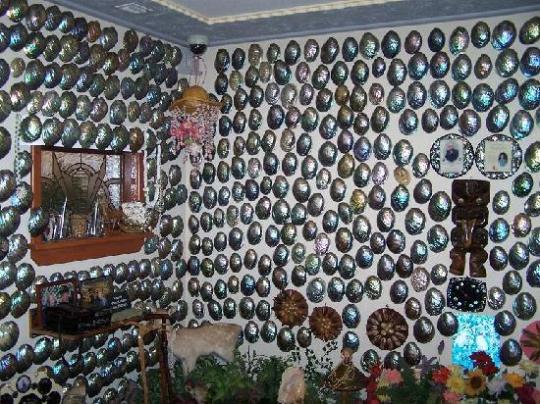 Paua also make a good feed. Personally I think they taste like cooked jandals, but apparently that’s because I either have no taste, or I didn’t tenderise them properly (you mean 30 minutes of bashing them with a wrench isn’t enough???).  If you’re still confused as to what they actually are, they’re big marine snails, also known as abalone.

There has been an outcry recently about a proposal for Otago’s protected coastline to be opened up to commercial fisheries, because this is prime paua collecting territory. A group called Paua to the People (geddit!) was formed in opposition to the proposal. They say that if commercial divers are able to harvest these paua, then they will take them unsustainably and leave none for the little guys. They might be right.

500km of Otago’s coastline is already open to these companies, and they have pretty much screwed it up big-time. They’ve taken too many big paua, leaving very little to collect later. But rather than coming up with a way to manage their areas sustainably, they want to open up some of the remaining 165km of coastline for commercial harvesting.

Naturally, recreational divers, and everyone else with a bit of common sense and no monetary interests in paua has said that this is a terrible idea, because this solves nothing in the long term. There is nothing to stop the companies harvesting these areas unsustainably too, and once these paua are gone – some say this will only take a week or 2 – then they’ll be in the same predicament as before.

But you know what, that’s capitalism kids. I’m no expert on economics, but it seems that the big businesses reap the short-term rewards, and then wonder what to do once they run out of stuff to sell.  I suppose it adds insult to injury that the commercially harvested paua are sold overseas too.

Submissions on this proposal have already closed, so I guess all there is to do now is hope that the Pauas that be (sorry, terrible pun) choose to do the right thing.